The miracle in the pot of soup 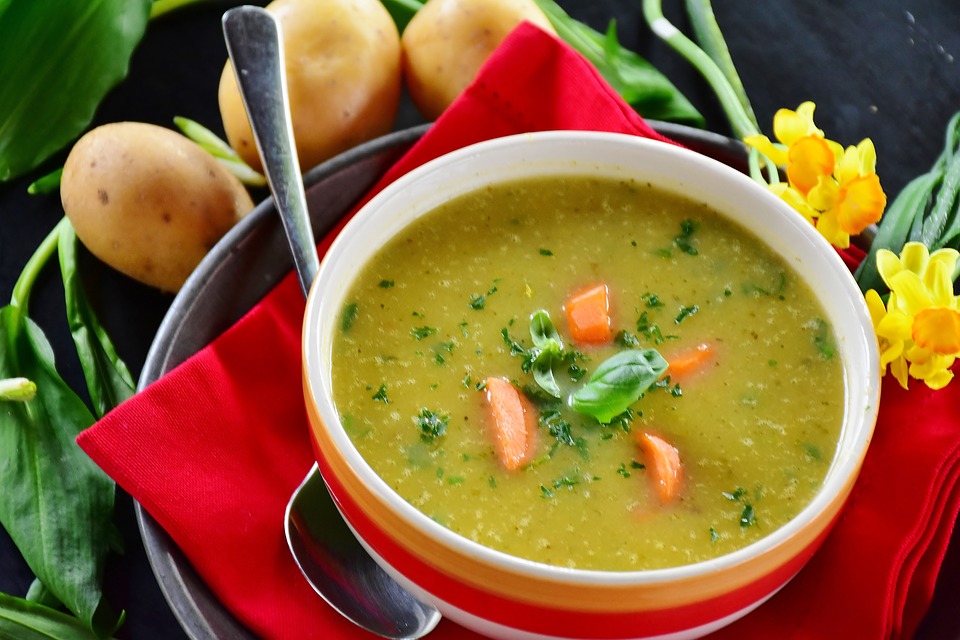 At the end of September, everyone around us was settling into their back-to-school routines. Back to co-ops, prayer groups, weekly youth catechesis. Our own schedule was dramatically pared down, by design. Suddenly, though, that design didn’t seem so smart.

To say the last couple of years have been grueling… well, that’s hardly necessary. But all of that gruel has happened outside the context of several of our cherished communities, or at least in the hinterlands. We left our beloved hybrid school when I was pregnant with Oscar. He was diagnosed at the tail end of the school year at our parish school, just before everyone parted ways and schedules for the summer. We joined a different hybrid school as newcomers during the longest, hardest, craziest year of our lives.

So much time, so many communities, so much rebuilding and starting over. In the center of that merry-go-round, our family huddled in an intense crucible of suffering, fear, and uncertainty. But we were always the newcomers (or the just-departed) on the boundaries.

We could have a long, productive conversation about those choices over a cup of tea and some scones someday, the ins and outs and comings and goings, and whether they were wise or prudent decisions. But the upshot is that, near the end of September, I found myself sitting in Mass, literally surrounded in the pews by family and friends who love us and support us. But I was in tears, feeling like I no longer truly belonged to these people, nor they to me.

Our experience of parenting is very far removed from most people’s; that experience itself is isolating. But in that moment it felt like the world was revolving without us, that everyone else was invited to a party we weren’t attending.

I felt isolated, abandoned, and alone, and I whined about it to God. A lot.

Later that same week, Oscar got sick, and he ended up in the hospital, and here is where things get really interesting. A hospital stay is very disorienting, almost an alternate universe. There is an extreme disconnect between the hospital and everyday life. Hospital time bears no resemblance to regular people time. (Hospital food bears no resemblance to regular people food.) During most of our previous hospital stays, I talked to no one but immediate family and medical personnel for the duration. Then I surfaced for air, shook my head to clear it, and tried to resume my regular life, now a flaming wreckage of neglected appointments and duties.

But during this visit, God used our community to bridge that unbridgeable gap, repeatedly, and in the most surprising, unexpected ways.

While we were still in the ER (the first time!), an acquaintance from our parish appeared, with no warning whatsoever, and brought piles and piles of delicious soup, sandwiches, and drinks.

The next morning, another acquaintance delivered tacos and coffee.

A third friend brought dinner to our house for Todd and the kids.

One showed up in my hospital room after bedtime with a contraband jar of sipping tequila. (Medicinal, of course.)

Our priest arrived shortly after Oscar was admitted for a second time, just to visit and bless our son.

Someone I had never actually met in real life, only emailed, left her family to come sit with me for hours during one of our scariest nights. When I was too timid to raise an alarm about a possible seizure, she marched out and dragged a nurse in by the elbow.

Over and over, time and again, Oscar’s little room filled with visitors from morning until night, keeping company and bringing good cheer. His nurses commented at one point that I was remarkably calm and chipper for having spent a week in the hospital with no sleep; I shrugged and answered that clearly, people must be praying their knees raw on our behalf. When Oscar’s room wasn’t full, my inbox and text messages were buzzing off the hook. When can we see you? What do you need? We offered Mass for you this morning, a rosary, a chaplet.

I had to laugh, and I had to shake my head. As usual, just when I was quite certain that God wasn’t listening and we had been abandoned to shoulder our miseries alone, He showed up in the faces and hands of my friends. He showered us with His outlandish, unmistakeable, foolish generosity, swathed in their gifts to our family.

(Sometimes, if the still small voice isn’t enough, God is not too proud to use the trumpet, the jackhammer, and the cannon to get your attention.)

The Spirit immediately drove him out into the wilderness. And he was in the wilderness forty days, tempted by Satan; and he was with the wild beasts; and the angels ministered to him.

The temptations (to despair, to control, to fear) have not ceased since our pilgrimage to Lourdes. If anything, the temptations have increased. It’s remarkably easy after “coming down the mountain” from a profound experience of God’s love to fall back into old habits of not trusting. I felt the wilderness, the wild beasts, the temptations.

God never stops loving, never stops seeking the sincere seeker, never fails to go after the lost sheep, who is bleating and afraid. I am grateful now for my temptations and doubts in the wilderness, because they set me up to be reminded again of his unfailing love, through his ministering angels, bearing pots of soup.