Three Good Things, or the vacation that wasn’t

Let me tell you how last weekend was supposed to go. We were going to drive our daughter and three friends to a weekend retreat on the Texas coast, spend a few days nearby hanging out on the beach, then pick up our daughter and a different set of retreat girls to return home. 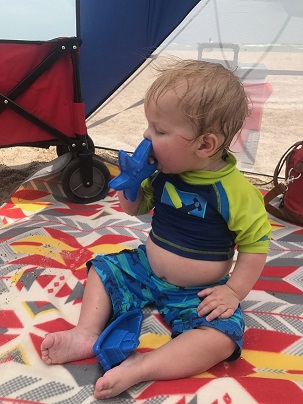 Back when we were still having fun

Here’s what actually happened: we left a day late because one of our other kids was sick. After a beach stop partway to our weekend destination, the van refused to start. We waited an hour in the blazing afternoon sun for roadside assistance, who couldn’t fix the car. We waited another hour for a tow to a nearby garage, after calling frantically to find one that would be open on the weekend. In the meantime, we tried to keep five hot, sandy kids from losing it.

I called local hotels and booked a suite. I called a local cab and found one… as in, one cab for the entire town. We bit the bullet and agreed to two separate cab rides. (Only when I arrived at the hotel with my youngest kids did I realize this arrangement required me to leave my children in a running cab with a stranger in order to grab a luggage cart.)

The “suite” had one bed. The garage couldn’t look at our van until the next day. The kids were hot, hungry, and bored. We spent all the next morning on the phone diagnosing the problem, hearing that the first garage couldn’t fix it, towing it (again!) to a dealership nearly an hour away, learning the part was not available, and being denied a loaner car big enough to hold us all. 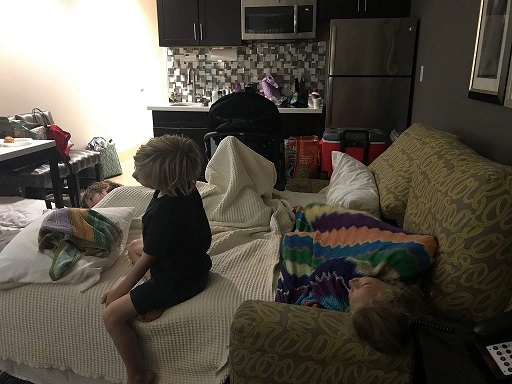 Meanwhile, my Oscar gauge was inching closer to E. We had brought enough ketogenic formula and medication for three days, period, and one and a half of those were gone. The dealership wasn’t even going to have the part for three more days. That is some bad, bad math, people.

By the grace of God, some friends were vacationing in the same town and loaned us their car to go pick up a (tiny!) rental. Todd drove the two little boys home, and I stayed at the hotel, stranded until the next day, with the rest of the children. We walked to dinner near the shore that night. It had rained throughout the day, so the air was cooler, freshened by a breeze blowing off the gulf. I began letting go of the landslide of stresses that had buried me so far that weekend, and just enjoyed my children’s company and silly conversation. When they begged to go to The Boiling Pot, a local seafood place featuring bibs and hammers, I caved, cringing when I mentally added the expense to the growing total of unexpected major expenses for the weekend.

At dinner, I decided to clear the air. “Okay, guys, we’ve had quite a weekend. Let’s get it off your chests. What was the worst part of your vacation?”

Stefan, my 10 year old melancholic, child after my own heart, dove right in: “Sitting in the hot sun for two hours waiting for the tow truck, and sitting in the hotel room with nothing to do all day.” 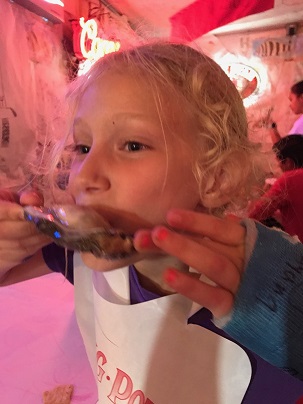 My 7 year old daughter, Miriam, who is usually neck-and-neck with Stefan in her knack for finding things to be upset about, tossed off: “Really nothing. I’ve had a great weekend. We got to go to the beach, and watch movies, and swim in the pool, and eat waffles. I’ve had so much fun!”

Benny, the 5 year old, chimed in, “Me too! And I love smashing crab legs. Thank you for taking us here!”

Miriam and I have played a bedtime game for years, designed to combat her (and my) tendency to over-catastrophize minor annoyances. We call it “Three Good Things,” and the object is just to tell each other three good things that happened to us that day. Some days, naming even one is an incredible struggle for her, but slowly, repeatedly, I’ve taught her that even on the worst days she can always fall back on, “God loves me, Mama loves me, Papa loves me.”

I guess the lessons are finally sinking in. Enough so that, on that particular day at the beach, she astounded me. And shamed me. She was absolutely correct, of course. A tremendous number of things had gone wrong that weekend, but so many more had gone right. The most right thing of all is that we were just present. To each other, to the moments that were in store for us, to the grace to meet those moments. So many people chimed in on my silly Facebook post to try to cheer me up, but even while it was happening, I realized I didn’t really need cheering up. It was ridiculous, yes, but I was also okay with it.

It is so easy to fall into a poor-me attitude… especially with a special needs child in the mix. I vividly remember thinking on the first, worst day, “I can’t believe we are stuck on this hot beach with our hot child in his hot wheelchair and NO HELP. What good are extended warranties and roadside assistance if we are still solely responsible for getting all our people to a safe place?”

God answers, “Why didn’t you take the log, the canoe, or the helicopter I sent?”

Help doesn’t always come when or how we want it, but it’s there. Days don’t always go according to our plan, but the Good Things God sends us are shining out like diamonds among the lumps of coal.

In the intervening days between our trip and this post, we learned that the results of Oscar’s expanded genetic testing (which we’ve awaited since April) came up empty. Nothing in his genes explains his condition. We traveled across the country for this last ditch attempt at diagnosis, and we are now stranded on the beach. No map, no roadside assistance.

I never thought I would say these words: I am okay with that. I am okay with the not-knowing, even with the never-knowing. I can trust that however this story plays out, God will send the help we need along the way, but only when—exactly when—we need it. We will always be able to find Three Good Things, even on the days we’re falling back on nothing but this: God the Father loves us, God the Son loves us, God the Holy Spirit loves us.